Why so few women on top ? What does it mean for women and public speaking?

Photo by Samuel Scrimshaw on Unsplash

It all started with this list : « The 100 Best-Performing CEOs in the World » from the Harvard Business Review.

How many women on that prestigious list? Out of one hundred? Have a guess!

One!…Only one woman…Incredible! And this woman is Margaret Whitman, ex CEO of eBay.. 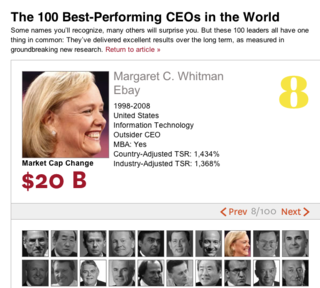 If, like me, you’re wondering why there’s only one woman nominated, take 10 minutes to read another article from HBR,

« Women CEOs: Why So Few? » especially the comments, coming both from men and women.If you’re more interested by Margaret Whitman Communication Style, skip to the bottom of the page, or even better, wait for my next post!

I can’t help but quoting Anne Perschell, from Germane Consulting, whom I « met » via twitter(@BizShrink).

« We need to change the lens and reframe this entire discussion. Let’s
begin with a review of the criteria for best performing companies and
best performing CEOs. Under what cultural rules were they determined?
What are the underlying assumptions about what « best » companies and
CEOs do and put into the world? Do they include a measure of the social
or environmental good vs harm; building strong families and
communities; raising moral standards? As long as the lens for
determining goodness is based on the predominant culture, those who are
seen as successful will for the most part be members of that
predominant group that creates the rules.
Women in business are creating a parallel economy that is changing
the lens, the culture, the rules and the way we measure business and
CEO success. For evidence, consider Andrea Jung’s mission for AVON –
« To improve the lives of women globally. »
It may take a while but we’ll get there. Harvard Business may see
the light some day but is not currently a leader in transforming how we
define successful businesses and the leaders who create them. If they
were, we’d have a different list based on different criteria and more
women would be included. »

What does it mean for women and public speaking?

I believe there’s a similar bias. We also need to change the lens and review the criteria for what makes a good speaker. We would then see and hear a large diversity of speaking styles and include as much women as men on stage.

What used to be the predominant model of Communication Style for leaders ?

According to Spony Profiling Model, an integrative management model sensitive to both personality and cross-cultural differences, this communication style matches the « Persuader » Leadership style.

I’ve been using this model in my training and coaching for 6 years now, especially at Cranfield School of Management with L’Oreal Executives.

This model reveals 12 styles of Leadership, and 6 Dilemnas.

Given the large part of women Marketing directors among L’Oreal, who were looking for role models, I decided, after asking the permission to Gilles Spony, to illustrate freely his model.

I researched and found 12 women leaders, illustrating each one « archetype » of communication and leadership style.

The ideal would be to ask each of the women speakers and leaders to take the questionnaire on-line and get an objective result.

This series of post is based on my perception and personal interpretation of how these leaders communicate, based on interviews, articles, testimonies and sometimes videos.

While I think the Persuader communication style is still one of the most successful in a corporate western environment, I believe each one of us has to speak according to our values, our personality and also respecting our culture or the cultures we are communicating with.

Articles → Why so few women on top ? What does it mean for women and public speaking?